A Conundrum… Part One. 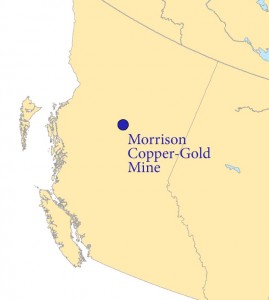 Regions around the world are ranked as to their jurisdiction’s ‘favourable’ resource extraction policies…and British Columbia is knocking itself down more than a few notches with a recent decision to NOT ALLOW PERMITTING a potential mine that had received all of the provincial and federal environmental approvals necessary to proceed…the Morrison Lake project of Pacific Booker Minerals Inc. (BKM: TSX-V, PBM: AMEX). This was a disaster for shareholders, with the stock plummeting from about $11 to about $4 on the announcement.

How do we open a mine here, we wonder…?

When even BC Ministry personnel comment that “…the process is not working…” and despite Federal and Provincial Environmental Assessments’ decisions of ‘no adverse effects’…and, that the property is not even in the same watershed as the ‘newly objecting’ First Nations groups who have recently lauded the decision of not permitting PBM’s Morrison Lake Mine…it warrants further investigation.

Particularly since decisions such as this can have an impact on the entire Province…and BC’s reputation going forward as a ‘mining-friendly’ jurisdiction. Now ‘we’re all’ worried…

What’s even more confusing (disturbing) is that investors in PBM have been along for almost a ten-year ride…as all of the ‘hoops’ a potential miner have to go through…have been very successfully navigated by the excellent Executive and Board, all with many years of relevant experience.

This decision runs counter to, in fact, in direct conflict with, everything the company has achieved in terms of Environmental Assessments, both Federally and Provincially.

As investors, you all have the same checklist (or should)…so a little Q&A for review of ‘the facts’:

1.         Where is the property and why is that relevant (‘closeology’, infrastructure…the whole area’s potential to support mining activities)?

PBM is in the advanced stage of development of the Morrison porphyry copper/gold/molybdenum deposit. PBM has completed a Feasibility Study           and the NI 43-101 compliant Technical Report and is proposing an open-pit mining and milling operation for the production of copper/gold/molybdenum concentrate from the Morrison deposit. It is located within 29 km of two former producing copper mines, Bell and Granisle.

The Feasibility Study was completed by Wardrop Engineering Ltd., a Tetra Tech Company, with technical support of a team of other consultants. The study describes the scope, design features and financial viability of a conventional open pit mine with a 30,000 tonnes per day mill.

The highlights of the Feasibility Study are:

Capital cost is estimated at CDN$516.68 million (including a CDN$59.92 million contingency allocation);

Operating cost of CDN$8.15 per tonne milled over the life of the mine;

Payback period on capital is 4.2 years.

[Ed.] A few numbers jump out at us…the very conservative prices used for the minerals, especially gold (Au), and the fact that silver (Ag) was not even included in the financial analysis!

b)            Silver was not included in the financial analysis; however, there is an opportunity for improved economic performance if silver credits are received from the treatment and refining of the copper concentrate. Metallurgical test-work to date has reported silver present in the concentrate.

– Check, even though some of our consulted experts do think the grade is on the lower side, yet since it’s near-surface and open-pittable, the costs are minimized as well.

– Check, some of the most experienced and completely appropriately skilled managers, and again, from their website:

Gregory R. Anderson, Chief Executive Officer, President, Executive Director, has a lifetime of business, corporate finance, investment, marketing and brokerage experience. He has, since 1997, been instrumental in funding all aspects of Pacific Booker Minerals Inc.’s growth as well as handling investor relations.

William G. Deeks, P-Eng. Chem., Executive Director, Chairman of the Board, has 50 years experience in Mining, covering Marketing, R&D, Environmental Management, Health Safety and Accident prevention at work sites, approval of exploration budgets and work on project feasibilities and is on the Governance committee of the Mining Association of Canada’s “Toward Sustainable Mining” initiative in which Booker will participate. Most recently he was Chairman of Charles Tennant Canada, a mining chemicals/collectors producer and Chemicals Distribution company.

John Plourde, Executive Director, has over 30 years of investor relations experience and has served as a Director of several public companies. He has been a Director of Pacific Booker Minerals Inc. since December 1999.

Dr. Dennis C. Simmons, DDS, Director, has a lifetime of experience in business, the medical profession and a background in mining.

– Check; it’s an excellent collection of expertise in mining and business backgrounds

6.         What have they accomplished recently for the company?

– they’ve managed the ten+ years of negotiating through all of the regulatory and environmental issues faced by mines being developed in BC, including all of the Federal ‘hoops’, too.

– Check; so far, no reasons to doubt any of their actions, which makes it all the more of a consternation that the approval to permit wasn’t fulfilled

9.         How do they get the dollars needed to advance the project (presuming they overcome the recent decision)?

– Check; this management team has always been able to get the necessary financing for each next step

– “That’s up to the Board, the Executive & the Shareholders” says Erik A. Tornquist, Executive VP & Chief Operating Officer.

10.       Have they ‘shopped’ the project among potential majors such as Tech, BHP, Xstrata…(exit strategy, investors’ potential for return)?

– “If that’s what the Shareholders want!” reiterates Tornquist.

[Ed.] Your author has seen the ‘stack’ of major investment bankers’ proposals that they’ve been approached by over the years…some of the ‘top dogs’ in the business.

For one of our advising sophisticated investors, his determination of PBM’s Net Present Value in relation to what the stock price would be if they get Permitted…

says it’s a BUY…in the presumption of about a triple on his investment. And he’s very often been ‘spot on’.

In order to complete this ‘dialogue’ we want to get answers from those that made the “No” decision…especially since everything, even in the written decision, seemed to pointing to a “Yes.”      The final page was literally a shocker.

– we’ll be contacting the personnel, although that’s been attempted a few times recently, and the person signed onto the decision document has since moved on…literally hours afterward. ‘Promoted’ they say…mmmhhh.

Factually, we’d like to find out why the ‘nearby’ First Nations groups found the ‘turn-down’ so pleasing, as they’re in a different valley? The local Nation is onside.

– They mention water quality in relation to fish stocks, yet that science has been performed diligently, with successful results.

How do we open a mine here, we wonder…?

David O’Brien [Ed.] has been following mining decisions over the past 16 years, and was flabbergasted by this decision, as were various other senior media people (see Ellsworth Dickson (Editor-in Chief)’s article in Resource World magazine of November 2012, among others). O’Brien holds no shares in any of the companies mentioned in this article. O’Brien runs a media company Int’l Mining Research Inc., specializing in building awareness for explorationists, developers and producers through media, events and online. IMR’s mandate is to provide investors free information, especially third-party commentary, to allow them to do their own Due Diligence.

He also owns an Ad Agency, W.I.T. Marketing, which produces marketing materials and campaigns…over the past few decades…in many industries: a Brand Specialist.