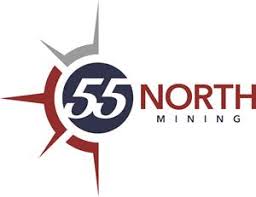 55 North Mining Inc.  announces that it has entered into a binding letter of intent with 2552883 Ontario Inc. whereby 55 North will enter into a business combination with 2552883 (a three cornered amalgamation) whereby the shareholders of 2552883 will become shareholders of 55 North.  2552883 is the owner of an option to acquire 100% of the rights, title and interest in the Last Hope Gold Project a high grade gold project located in the emerging Lynn Lake Gold Camp in northern Manitoba.

55 North is a reporting issuer in Ontario, Manitoba and British Columbia.  2552883 is a private company.  Neither company trades on a recognized stock exchange.  As such, the proposed relative ownership of each company’s shareholders of the pro forma company reflects relative valuations of each company’s assets, ex-dividend, as determined by the management and board of directors of each company, and will be confirmed by independent third party fairness opinions obtained by each company.  This Planned Transaction will be documented in a definitive agreement which will be subject to shareholder approval.

The Last Hope Gold Project provides the following benefits to 55 North and its shareholders:

Potential Synergy with Neighbouring Assets: Last Hope’s resource estimate has a grade which is over 3 times that of Alamos’ Lynn Lake project’s P&P reserves (31.977Mt grading 1.83 g/t for 1,884,800 ounces).  Should exploration success at Last Hope result in a larger resource estimate, it could then potentially become a high grade satellite deposit for any future Alamos mining operation at Lynn Lake.

Bruce Reid, President and CEO of 55 North commented: “We are excited to have entered into a binding letter of intent with 2552883 Ontario Inc. to effect a combination with the express purpose of acquiring the high grade Last Hope Gold Project.  We believe that our technical knowledge of the area and the deposit, together with recent work on the project, present us with an exceptional opportunity to potentially significantly grow the resource estimate and generate shareholder value”.

55 North Mining Inc. was incorporated under the Canada Business Corporations Act on December 5, 2008. The current business of the Company is exploration and development of its mineral properties.

2552883 Ontario Inc. is a private company incorporated in Ontario.  It owns the option to acquire 100% of the Last Hope Gold Project.