Jason Cubitt, Jaxon’s president and CEO commented: “This is showing all the signs of a large precious and base metals-rich porphyry system and may be a primary engine driving mineralization in the entire district. I congratulate our technical teams for the excellent work they’ve done identifying it.” Mr. Cubitt continued: “Based on this discovery, Jaxon now has two primary discoveries within the Hazelton district, the now-confirmed Max VMS system and the CRT/RS system hosting high grade precious and base metal mineralization.”

The initial discovery of extensive breccia bodies which returned high grade gold and tellurium assays from the Cirque-Ridge-Tarn was reported in Jaxon’s press release of September 14, 2017.

During the fall exploration season Jaxon expanded the surface prospecting coverage of the brown and bright red gossanous areas of the CRT and RS prospects with a further 49 rock samples collected from the CRT. This work not only returned high grade gold assays but also expanded the extent of the tourmaline breccia occurrences to three separate cirques approximately 500m apart. 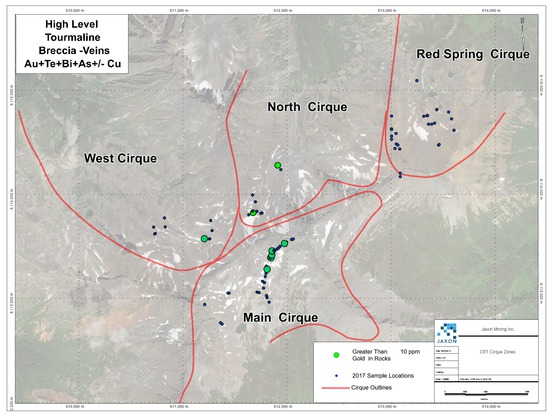 The tourmaline breccia bodies are manifest as both near vertical planar structures and as apparent stratabound bodies. The high sulphide content results strong oxidation, making the mineralization very visible as brown, rusty outcrops. The tourmaline breccias are characterized by the chemical association of gold-tellurium-bismuth-arsenic-antimony-boron which Jaxon interprets as being indicative of an intrusive origin for the mineralization.

While exploration at CRT and RS is at an early reconnaissance stage, Jaxon is highly encouraged by the tenor, style, vertical extend and broad distribution of the breccia bodies. Most encouraging are significant widths of the breccia zones observed to date of up to 5m. The distribution of the breccia bodies proximal to the large RS alteration zone and the fact that tourmaline breccia is developed within the large disseminated pyrite zone at RS may suggest a genetic link and Jaxon is adopting an exploration model based on the concept that the breccia bodies are genetically related to porphyry processes associated with the RS alteration. This working concept remains to be proven yet the lines of evidence at present are compelling in that:

Jaxon intends to undertake a major program of geological and alteration mapping over the CRT and RS prospects over the 2018 field season based on this exploration model. The program will include further geochemical sampling, geophysics and first pass drilling on the CRT breccias. The objective for the RS prospect is to define the character and extent of the large alteration system of the large alteration with the objective of defining drill targets for the 2019 season.

Prospecting samples were collected in the field by experienced, professional prospectors and geological staff who selected hand samples from outcrop, chip samples, boulder and talus debris samples suitable for slabbing by rock saw. The samples were numbered, described and located in the field for follow-up. Numbered rock sample tags were placed inside each bag which was securely closed for transport to Jaxon’s’ secure cold storage locked facility in Smithers, B.C. At the end of the diamond saw core cutting program for the Max drilling project in December, representative sample slabs were cut from large specimens and halved rock samples so that portions of most samples collected in the fall could be saved for the Jaxon’s rock library, descriptive purposes and petrographic study. MS Analytical of Langley B.C. received the Rice Bag shipments after secure transport from Smithers and they prepared the samples by crushing, grinding and pulverizing to a pulp with barren material washing between each sample at the crush and pulverizing stages. Then 20 g of pulp was used for the (IMS-117 code) ultra trace level ICP/MS AR digestion method, and four acid 0.2 g ore grade ICP -AES method (ICP-240) and for the overlimit gold the FAS-415 method of 30 g fusion Gravimetric method was used to report gold ASSAY 33.8 ppm. Laboratory standards and QA -QC is monitored by Jaxon.

Technical information in this news release has been reviewed and approved by Derrick Strickland, P.Geo., a qualified person as defined in National Instrument 43 -101.

Jaxon is a precious and base metals exploration company with a regional focus on Western Canada. The company is currently focused on advancing its Hazelton Project in north-central British Columbia and the More Creek Project (consolidating the Wishbone and Foremore properties) in BC’s Golden Triangle.