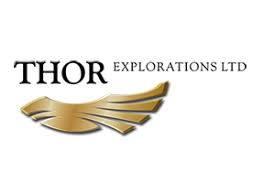 Thor Explorations Ltd. (TSX-V: THX) is pleased to announce it has drilled a potential discovery hole at a new prospect called Maka South located in the north east of the Douta Permit on its Douta Gold Project in south-east Senegal. The hole was drilled as part of a 1,000 RC metre reconnaissance reverse circulation program on a number of previously defined drill targets by soil geochemistry in the Maka area of the licence.

Drillhole DMRC012 on the Maka South Target intersected 4 metres true width at 11.4g/tAu from 18m downhole (Table 1). In addition to this result, seven other RC holes intersected anomalous gold mineralisation including 1m at 3.59g/t Au in drillhole DMRC013 (Appendix 1) on other targets in the area.

These first pass drill results are considered to be significant as they are located adjacent to the nearby Makabingui Gold Project comprising total resources of 11.9 million tonnes at 2.6g/t Au for a contained 1 million oz Au in an area of the Douta Permit that has received very little exploration attention to date.

Segun Lawson, President & CEO, stated: “A second prospect in the Douta permit further strengthens management’s assessment of the prospectivity of Thor’s Douta Permit as a whole. In addition to this, we are still looking forward to receiving the pending results from approximately 4,000 metres of RC drilling that were drilled at Makosa prior to the start of the rainy season in July. We will be in a good position to evaluate our options on the Douta Permit as a whole following the rainy season.”

To date, diamond and RC drilling have been used to delineate gold mineralisation at the Douta Project in Senegal. A total of 13 diamond holes for 1,531m and 24 RC drillholes for 2,000m were completed over the Makosa Prospect and 7,800m of the planned 8,000m have been completed in the 2018 RC Program over a strike length of approximately 2.2km (refer to Figures 1 and 2).

In addition to the drilling carried out at Makosa, Thor carried out a 1,000 metre scout drilling program on three drilling targets in the Maka Area that had been delineated by previous drill target generation that included soil geochemistry carried out by the Company.

The Maka South prospect has now been prioritised for follow up exploration work following the drilling of the potential discovery hole (refer to Figure 2).

The above information has been prepared under the supervision of Alfred Gillman (Fellow AusIMM, CP), who is designated as a “qualified person” under National Instrument 43-101 and has reviewed and approves the content of this news release.  He has also reviewed QA/QC, sampling, analytical and test data underlying the information.